The Bullfight in Pamplona has always been the climax of the Running of the Bulls. From 7 to July 14 at 18:30 takes place a show whose special feature is the audience. Up to the death of the thrird bull, the arena is shared by the most exquisite bullfight lovers versus The bullfights are organized by the House of Mercy and the benefits obtained are used to provide care for the elderly.

The famous Peñas, that sit on the sun side and are the true stars of the party with their bustle, colourful dresses, songs and afternoon snacks. It is quite difficult to adquire an tickets, as 90% are given through the “abono”system (small book with the daily tickets on the chosen area) thatt he local families are entitled to as they buy them yearly.  The easiest way is to queue and buy the tickets at the end of each bullfight.
Posted by Angeloi at 7:44 PM No comments:

Email ThisBlogThis!Share to TwitterShare to FacebookShare to Pinterest
Labels: San Fermín = The Sanfermines 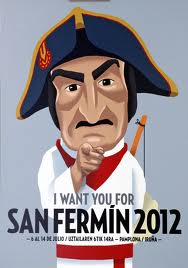 The work entitled 'I love you for San Fermin', reproducing an image of the big head "Caravinagre" (Vinegar Face) from the navarre designer David Joy, was the winner among all the posters advertising the festival of San Fermin 2012.

The image of the San Fermin Festival for this year its produced by digital techniques that evoke the American icon "Uncle Sam". The big head is pointing a finger at the viewer with the caption "I Want You for San Fermin". The author commented that this work "is understood quite well" and is "a kind of joke” or adaptation of the famous American poster which was a milestone in the history of design.

The winning poster, which was elected in a popular vote among the eight finalists, received 1,910 of the 6,422 votes cast by the locals, almost 30 percent of the total.
Posted by Angeloi at 6:41 PM 3 comments: 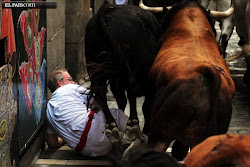 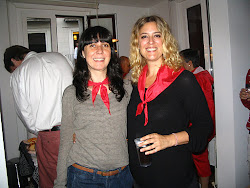